Tokyo, London, Paris. These three metropolises always seem to dominate lists for the world’s affluent population – but there’s a lot more nuance to understanding and tracking these individuals, as Coldwell Banker Global Luxury’s The Report 2022 found.

Shifting values and lifestyle priorities during the pandemic transformed how and where the world’s wealthiest live. Additionally, global wealth not only held steady from 2020 to 2021 but also rapidly increased in the second half of 2021 — speeding up migrations in many property markets worldwide.

To better understand how global wealth and the increasingly fluid relationship between the affluent, the real estate they own, the cities where they live and their evolving residential footprint around the globe will impact future property markets, the Coldwell Banker Global Luxury program consulted with Wealth-X to provide data on 21 major global cities outside of the United States. Here’s a quick snapshot of what was discovered:

Global affluent populations have remained relatively stable since 2016. Among the top 10 cities with the greatest number of individuals with $5 million+ in net worth in 2021, Tokyo has claimed the top spot for the last five years. Hong Kong, Paris, Osaka and London followed in 2021 for the top five. 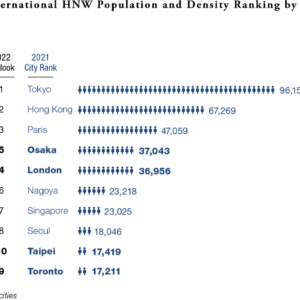 According to Wealth-X’s predictive analysis, Tokyo is expected to remain dominant for at least another five. London will move to No. 4, overtaking Osaka, Japan, and Toronto will move to No. 9, past Taipei. More notably, however, are the growth rates of London and Paris – two Western European metropolises that saw their wealthy populations drop in 2020 during the onset of the pandemic. Their population upswings in 2021 follow a similar pattern seen in major U.S. cities like New York as people have returned to live in urban settings again. In contrast, the affluent populations in East Asian cities such as Tokyo, Hong Kong, Osaka, Nagoya, Singapore and Seoul stayed on a steady upward trajectory between 2020 and 2021. Drawing on their experience with previous SARS and MERS outbreaks, these cities were able to weather COVID-19 better with travel restrictions, mass testing, contact tracing and strict quarantine measures early on in the pandemic. Toronto also managed to maintain its upward growth trend. Unlike Paris and London, it is a city with a higher percentage of domestic citizens as opposed to foreign residents.

The post Where the World’s Wealthiest Live Outside of the U.S. appeared first on Coldwell Banker Global Luxury Blog – Luxury Home & Style.