New York City is one of the most iconic — and most-filmed — cities in the world. Often elevated to a character itself, the Big Apple is home to hundreds of movie and television shooting locations — from Central Park (which ranks among the most-filmed sites with a remarkable 532 total movie credits according to one tally) to the Empire State Building and The Dakota, New York City’s first luxury apartment building. And there are countless other buildings that pay homage to the city’s most notable silver screen moments.

Courtesy of Warburg Realty (recently acquired by Coldwell Banker Real Estate LLC), we found three silver screen-worthy Manhattan properties that have served either as a setting or backdrop in a movie or television series. If you count yourself a cinephile or a TV fan, this classic trio of co-ops offers something most Upper East Side apartments don’t: a chance to feel like you’re a part of your favorite film or TV series.

Few New York City apartments compare to this sprawling, roughly 5,000 square foot home inside the luxury co-op, The San Remo. The three-bedroom apartment was once a 13-room residence, which has been impeccably renovated to provide modern conveniences all while maintaining its glamorous charm. The dazzling two-tower building’s exterior and interior starred in the 1970s sitcom “Neil Simon’s The Odd Couple.” Tony Randall, the late star of the series, even lived at the San Remo for a time. 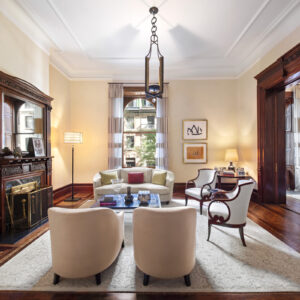 White-glove service, 14-foot ceilings, and meticulously restored pre-war details await the residents of this three-bedroom home inside the prestigious Dakota co-op. But not only that, the interior and exterior of the building were seen in the 2001 sci-fi drama “Vanilla Sky” starring Tom Cruise, and shots of the Dakota’s exterior appeared in Roman Polanski’s 1968 psychological horror film “Rosemary’s Baby.”

Listed by Lisa Chajet and Bonnie Chajet of Warburg Realty 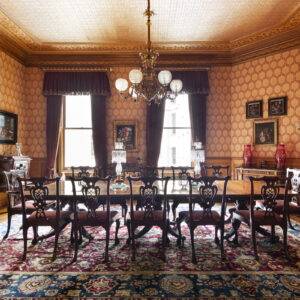 Yet another opulent residence is available inside The Dakota. This one spans roughly 3,800 square feet and comes with truly breathtaking details, like gold-inlaid ceilings and Egyptian mahogany wood-paneled walls. Aside from the aforementioned films, the Dakota’s exterior was also seen as part of the 2007 crime drama “Chapter 27” starring Jared Leto.